As some of my colleagues say, I’m a recovering recruiter. What’s that mean? It means I started my career on the “other side” of the business. It wasn’t too long ago that I was in your seat, working for companies ranging from 500 employees to as large as 97,000 employees.

I truly understand when recruiters say they have no time. I know first-hand what it’s like to have hundreds of open requisitions, meet with hiring managers, and review applications and source for talent. I’m all too familiar with the feeling that you never have enough hours in the day to do it all.

Back in January, Ed Newman wrote a blog post about ways that companies are driving candidates crazy. I want to talk about the other side so I put together a list of the top things that bugged me when I was a recruiter. I am sure you can relate to a number of these scenarios, and probably have stories of your own.

2. Typos and getting your name or the company name wrong I can’t tell you how many times I’ve been referred to as Laura, Lareun, or Laureen. The worst is when a candidate is clearly using a resume or cover letter template, and they forget to change the “insert company name” to the right company. If it’s clear the candidate is a good fit, I would sometimes recommend they go back and proofread their work. However, this is also a sign of their attention to detail (or lack thereof).

3. Showing up inappropriately dressed for an interview I’m currently typing this in a sweatshirt and jeans, but even in the days of casual work environments – it’s sometimes shocking to see what candidates think is appropriate for a first impression. Try to give a heads up if your company culture is casual or if more business professional attire is required. 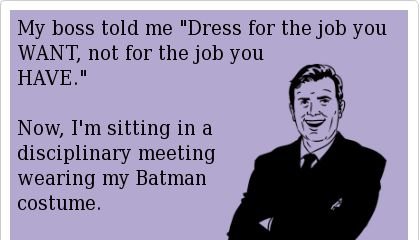 4. Asking ridiculous questions I have been called an hour before the interview was supposed to start so that a candidate could ask if I knew what the traffic was like from their house to another office location. In general, I’m a curious person and ask a fair amount of questions, but I had no idea how to handle that one.

5. Being unprepared or unsure of who they’re meeting I had a candidate who shared with me that they had been up late the night before working on something. In turn, they had a lot of caffeine in their system, and they felt they weren’t prepared for the interview. Even better is when a candidate shows up, and they have no clue who they are scheduled to meet. Worse is when they have no clue what position they are even interviewing for at the company. In some cases, this could be the recruiter’s fault, but candidates should do their research.

Why are you telling me this?

6. Telling you they’re really excited about the company and opportunity, but then they turn around and reject your offer When you find a great candidate and the hiring manager likes them, you put together an enticing offer package. It’s very disappointing when they don’t accept. You can’t take it personally though as the candidate is just doing what they feel is right for them at the time. Who knows? They could come to you looking for a job in the future.

7. Candidate finally gets back to you months later after the job has already been filled You sourced the perfect candidate for the role. You reached out a few times, but never heard back. You moved on, only to have them reach back out a few months later. At this point, you can only hope that they are more responsive if you have another opening in the future.

What have your candidates done that drives you nuts? Share your stories in the comments below.